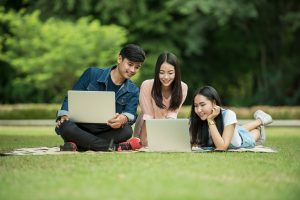 Erhan came to England to study for a Masters but realised that he would need to improve his English to do a course at that level. His cousin recommended the Lifeline Learning Academy and he has been very pleased with the college. He likes being part of a small class which allows him good interaction with his teachers.

Erhan describes London as ‘amazing’ with so many things to do such as concerts, museums and events. He says people are kind and surprisingly friendly. He is impressed that people are from ‘everywhere’ but speaking a common language.

Erhan studies four mornings a week and when he’s not studying he works as a Barista at Costa Coffee in West Ealing. He has found that work gives him a chance to practise his English.

Erhan still plans to study for a Masters degree but now feels that he has the English skills to cope. He feels that learning English has opened up many opportunities, ‘the whole world speaks English so when you speak English the whole world is your oyster’.

Powered by The English level test